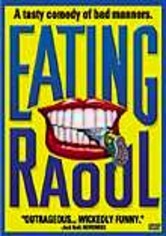 1982 R 1h 23m DVD
Paul and Mary Bland (Paul Bartel and Mary Woronov) dream of owning a restaurant but can't pony up the $20,000 down payment that will make it a reality, so they come up with a macabre plan to raise the cash in director Paul Bartel's black comedy. When an intruder is killed after he tries to assault Mary in the Blands' home, the couple decides to lure sex-seekers to their home via a classified ad, kill them and take their money.