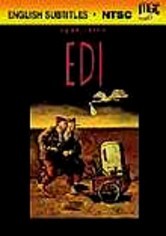 2002 NR 1h 37m DVD
Edi (Henryk Golebiewski) and Jureczek reside in a run-down factory and make a living by recovering scrap metal from trash dumps. When Jureczek is beaten to death by two brothers who say the pair owe them money, Edi is shocked and fears for his own safety. Soon after, he's approached by the brothers, who ask him to tutor their sister. He consents, but when the sister ends up pregnant, Edi is pegged as the father and must pay the price.