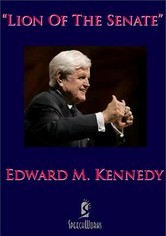 2009 NR 1h 5m DVD
History and political science buffs will appreciate this anthology of speeches by Sen. Ted Kennedy -- one of America's most enduring lawmakers -- featuring footage spanning more than four decades of the Massachusetts democrat's illustrious career. Highlights include Kennedy's moving eulogy at his brother Robert's funeral in 1968, the dedication of the John F. Kennedy Library in 1993 and a stirring speech from Barack Obama's presidential campaign.