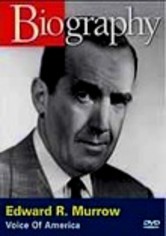 1997 NR 0h 50m DVD
Dubbed "the Voice of America" during his days as a radio announcer, Edward R. Murrow helped shape the fledgling medium of broadcast journalism in the 1950s by giving it something unexpected: a conscience. Through extensive interviews with friends, colleagues and his biographer, Joseph Persico, this installment of "Biography" reveals Murrow's professional and private struggles and his lasting influence on the structure of television news.