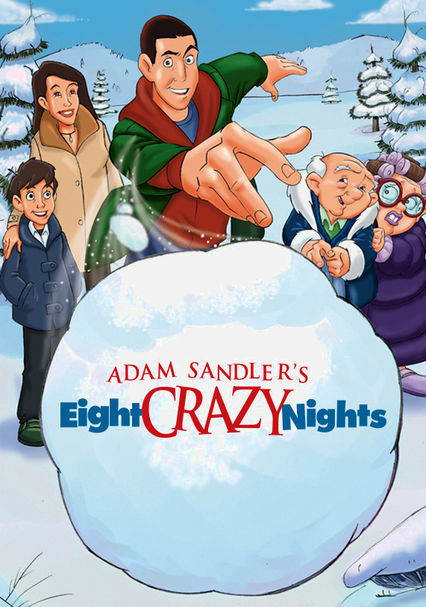 2002 PG-13 1h 16m DVD
As the holidays descend on the town of Dukesberry, surly Davey Stone's drunken antics land him in trouble with the law. When he's given a chance to redeem himself as an assistant referee for a teen basketball league, will he get into the spirit?

Parents need to know that Adam Sandler's Eight Crazy Nights is an animated Hanukkah feature with more than its fair share of inappropriate and gross-out humor. This movie is not for young children or those who might find lead character Davey's actions worth imitating. The movie has extremely vulgar humor, strong language -- including "crap," "bulls--t," "bite me," and "butthole" -- and the middle-finger gesture. The lead character makes a joke at the expense of an overweight child; another joke is made about a transgender woman. Look out for references to a "morning erection" and innuendo involving the word "melons." In perhaps the most disturbing scene, an elderly man in a portable potty is kicked down a snowy hill. He emerges covered in excrement and immediately is frozen. Deer lick the excrement icicle until he's thawed out and are shown with excrement on their teeth. There also is Asian stereotyping.

Frequent crude humor, potty jokes. A woman has three breasts for no discernible reason other than to use the image as a recurring sight gag. Sexual innuendo. A drunk man who nearly gets into his car to drive home is prevented from doing so by the police; the man claims he's pretending to say goodnight to the car and engages in pelvic thrusts to the car's trunk. Two male police officers are handcuffed so it looks like they're in a sexual position. Reference made to a "morning erection." An elderly man's naked rear end is exposed, covered in thick white hair.

An elderly man in a portable potty is kicked down a snowy hill. He emerges covered in excrement and freezes that way; deer come along and lick the excrement-laden man until he's thawed, and the deer have excrement on their teeth. Same elderly man falls from a tree.

Frequent profanity: "crap," "bulls--t," "bite me," "butthole." The lead character makes a joke at the expense of an overweight child; another joke is made about a transgender woman. Middle-finger gesture. Reference to a "morning erection." Sexual innuendo involving the word "melons."

Any attempts at positive messages and redemption of the characters is overwhelmed by inappropriate attempts at humor. Some Asian stereotyping and jokes about disabled people.

In scenes set in a mall, all the stores are mentioned by name: Foot Locker, Sharper Image, Body Shop, and at least 12 others. Many of these store's mascots come to life and offer advice and wisdom to the lead characters.