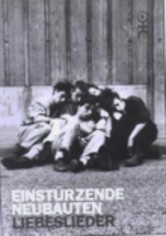 1993 NR 1h 0m DVD
Industrial musicians Einsturzende Neubauten command the screen for this 100-minute retrospective of their work. Originally aired as a documentary for German TV, this collection of footage, including interviews, concert material and rare film clips, charts the band's evolution and their spreading influence. For these performers, no instrument is too off-the-wall, including drills, jackhammers and chain saws, to test the boundaries of music.