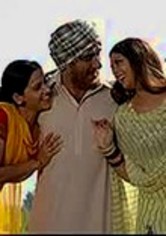 2006 NR 1h 30m DVD
After his parents die, Sukha (Raj Babbar) raises his six young siblings. He falls in love with Gurjit (Ritu Shivpuri), but realizing she's reluctant to accept his family, Sukha breaks off the relationship. Gurjit's brother Kundan (Deep Dhillon) is enraged at this rejection of his sister. Years later, when one of Sukha's brothers wants to marry, he faces a big obstacle -- the object of his affection is the still-angry Kundan's daughter.