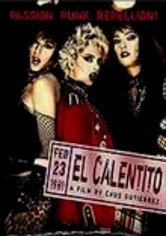 2005 NR 1h 29m DVD
When all-female punk band Las Sioux loses a member, they persuade virginal young Sara (Verónica Sánchez) to join them as they play at rowdy underground nightclub El Calentito. Soon, the music leads Sara into a debauched world of sex, anarchy and uninhibited revelry. Set during the period of Spain's shaky move toward democracy in the early 1980s, this raucous musical comedy co-stars Ruth Díaz and Macarena Gómez as the other band members.