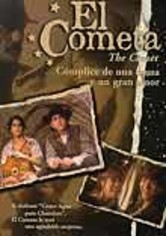 1999 NR 1h 35m DVD
Set in 1910 during the uprising of Medero's forces against the Profirio Diaz command, El Cometa is the story of love, war and the cinema. Romualdo runs a variety show that just lost its biggest star, his son Victor (Diego Luna), to the lure of the cinema and cinematographer Guy (Patrick LeMauff). Guy agrees to help Romualdo get his act back on track in exchange for harboring Valentina (Ana Claudia Talancon), the daughter of a Medero rebel.