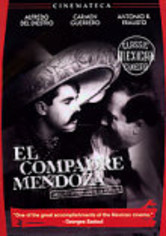 1933 NR 1h 25m DVD
During the Mexican Revolution, calculating landowner Rosalio Mendoza (Alfredo del Diestro) courts both camps to make a buck. After coaxing government officials into letting him do business undisturbed, Mendoza then plies Zapata's rebels with mescal for the same purpose. But how long can he sustain his scheming before he's forced to take sides? Fernando de Fuentes helms this 1933 classic, the second offering in his Revolution trilogy.