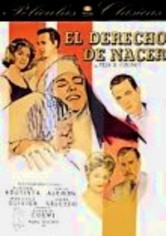 1952 NR 1h 50m DVD
Raising a few eyebrows at the time of its 1952 release, this moving social drama, based on a novel by Felix B. Caginet, stars Barbara Gil as María Teresa, a young, unmarried pregnant woman. Hoping to spare her family shame, she consults a doctor (Jorge Mistral) about an abortion, but the physician refuses to perform the operation, pointing to an incident in his past that cemented his stance on the controversial procedure.