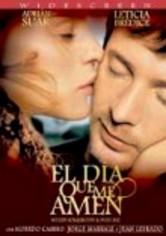 2003 NR 1h 50m DVD
Two childhood pals, Joaquin (Adrian Suar) and Mara (Leticia Bredice), have lost their way as adults in this moving drama. Joaquin's afraid of the world, and his fears and insecurities won't allow him to leave his father's home. Mara, on the other hand, just can't seem to decide what she wants to be when she grows up ... even though she's already an adult. Separate, they're as fragile as can be, but together, they're a force to be reckoned with.