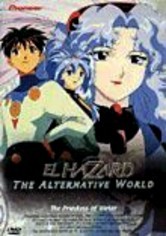 1998 NR 4 discs
In the first four episodes of this Japanese animated series, an enigmatic entity named Arjah teleports Makoto and Co. to an alternative dimension during the crowning of the new priestess of water, Qawoor Towles. Makoto, Nanami and Qawoor land in Creteria, where Qawoor and Nanami are mistaken for ancient sky goddesses. Meanwhile, others in Makoto's group encounter the alternative world's version of the insectlike Bugrom race.