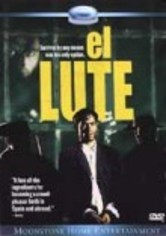 1987 NR 2h 3m DVD
Dictator Francisco Franco ruled Spain with an iron fist in the 1960s, but even he couldn't break the spirit of Eleuterio "El Lute" Sánchez (Imanol Arias), the Robin Hood of Spain. Born poor, El Lute had a run-in with the law and was sentenced to life in prison. This pair of films, based on the real-life memoirs of El Lute, tells the story of a common thief whose daring escapes and anti-Franco stance made him an uncommon folk hero.