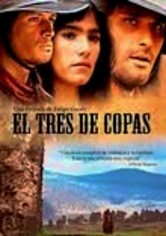 1986 NR 1h 57m DVD
At the tail end of Mexico's "Reform War," Pedro and Damian, two mercenaries raised as brothers, find themselves in a downward spiral that involves gambling, robbery, murder and a beautiful woman named Casilda, whom they both covet. It's a recipe for disaster.