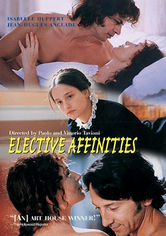 1996 NR 1h 38m DVD
Separated for 20 years, lovers Edward (Jean-Hugues Anglade) and Carlotta (Isabelle Huppert) reunite and marry. But their late-found bliss is short-lived when they invite Edward's friend Otto and Carlotta's teenage godchild, Ottilia, to visit. Husband and wife find themselves attracted to their guests, resulting in passionate acts with lasting repercussions. Paolo and Vittorio Taviani direct this lavish adaptation of the Goethe novel.