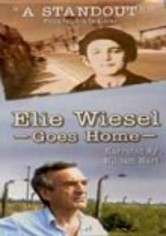 2002 NR 1h 45m DVD
Judit Elek's gripping documentary follows Nobel Peace Prize winner and foremost Holocaust authority Eli Wiesel as he embarks on an emotional return to his 1928 birthplace of Sighet, Romania, for the first time in more than 50 years. Highlighted by passages from Wiesel's own writings read by actor William Hurt, Wiesel wanders his hometown's streets, which remain eerily unchanged since the time he spent there before leaving for Auschwitz.