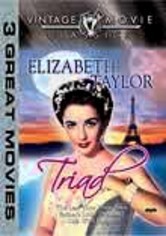 1947 NR 5h 10m DVD
Three great Elizabeth Taylor movies on a single disc! In The Last Time I Saw Paris, veteran Van Johnson meets the lovely and lively Elizabeth Taylor in Paris after the war and falls in love. In Father's Little Dividend (the sequel to Father of the Bride), Stanley Banks (Spencer Tracy) gets word of the impending birth of his grandson. And in Life with Father (based on the hit Broadway play), 1880s New York never looked better.