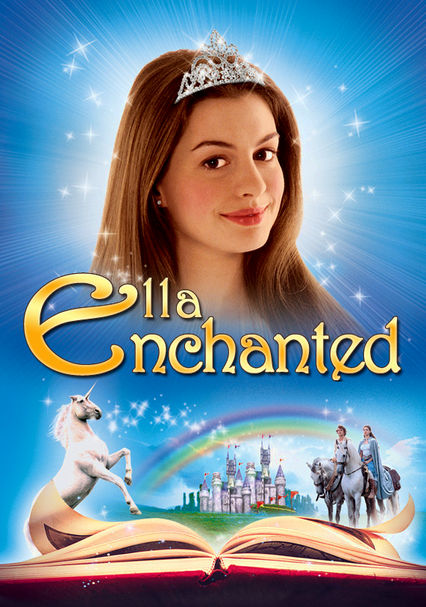 2004 PG 1h 36m DVD
Burdened at birth with the "gift" of obedience by a flighty fairy godmother, Ella searches for a way to lift the curse that prevents her from pursuing her dreams -- and her true love, Prince Charmont.

Parents need to know that Ella Enchanted has some crude language ("bite me," "cute butt") and social drinking. It is supposed to be humorous when a character gets tipsy and has a drinking problem. There is violence, including fighting, knives, and swordplay, and there are a couple scary scenes where a main character is in peril. A character is hit in the crotch in a slapstick fight. In a more serious fight, it appears that a character is killed, but it turns out not to be the case. Ella's mother becomes ill and dies. Ella is ordered to shoplift and due to the curse, must obey.

One of Ella's stepsisters is obsessed with a handsome prince, to the point where she puts up "prince pin-ups" on her wall and chases him with a crowd of girls. Ella implies she likes Char because of "how cute his butt is." Ella and Prince Char flirt and kiss; there is a subplot about a female giant (dressed in a belly shirt) who falls for a small elf. She shoots him lusty glances and cradles him in her arms. A tough flings a knife at an elf's crotch and threatens to make him "sing soprano."

Mostly mild, cartoonish, and played for laughs, but some sequences are pretty scary, i.e. when a giant ogre threatens to eat Ella and barbecue or shish kebab her; later she is shown trussed and about to be lowered into a boiling pot. Ella's curse also threatens to make her murder Prince Charmante; she stands threatening to stab him with a knife. Ella's mother also becomes ill and dies.

No cursing, but some crude language: One little girl says "bite me" at one point, whereupon Ella bites her.

The movie's bad characters are frequently unattractive and garishly dressed, which sends an old-school fairy tale message about goodness and kindness always coinciding with beauty.

At a giant party, guests guzzle colored drinks from martini glasses, and a fairy slurs her words and falls off a stool. Ella's diary godmother is said to have gotten an "FWI," flying while intoxicated and shown taking a sobriety test.