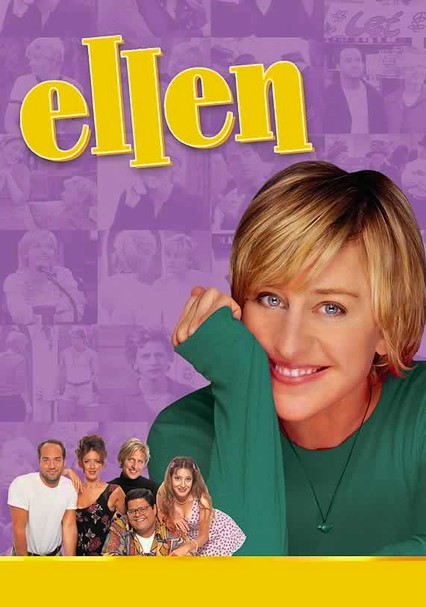 1994 TV-G 4 seasons
Before Ellen DeGeneres hosted her own talk show and served as a judge on "American Idol," she starred in this self-titled sitcom as Ellen Morgan, an eccentric thirtysomething who works in a bookstore and hangs out with a quirky batch of friends. The show made history in its fourth season when Ellen's character came out of the closet -- sparking controversy as well as acclaim -- not long after the actress announced that she is a lesbian.

Originally known as "These Friends of Mine," this 1990s sitcom stars Ellen DeGeneres as Ellen Morgan, a high-strung thirtysomething woman who works in a bookstore. She and her quirky circle of friends try to make it through the everyday trials and tribulations of life with smiles on their faces and their sanity intact. Arye Gross co-stars as Ellen's roommate and college buddy, and David Anthony Higgins plays the bookstore's surly barista.

Quirky bookstore owner Ellen Morgan (Ellen DeGeneres) forges head-on into more absurd situations -- which includes being a contestant on "American Gladiators" -- in the second season of this groundbreaking comedy series. In other episodes, Ellen goes on a blind date arranged by her mother, masquerades as an exercise trainer and takes ballet lessons. Kathy Najimy, Dann Florek and Nita Talbot are among the guest stars.

In the final season of this landmark series, Ellen (Ellen DeGeneres) is out of the closet and relationship-ready. Or is she? The laughs continue as Ellen and her eccentric pals (Jeremy Piven, Joely Fisher, Clea Lewis, David Anthony Higgins) continue to deal with whatever life throws at them. Highlights include Ellen taking up mountain climbing to impress a cute spinning instructor and a stint in boot camp during a Civil War reenactment.

Parents need to know that this show focuses on the importance of friends and family, despite their flaws and imperfect natures. It also highlights the idea that humor can be found in even the most ordinary situations, if we choose to see it. Parents should also know that later episodes of the series (those filmed after star Ellen DeGeneres came out in real life) focus on homosexuality and same-sex relationships.

Rare use of mild words like "damn" and "crap."

Ellen and her circle of friends have their quirks, but are also caring and loyal. Ellen's parents struggle with but ultimately support her when she comes out. Some later secondary characters reject Ellen after learning about her sexual orientation.

Occasional references to animal activist groups and other service-oriented organizations.

Occasional alcohol consumption by adults, which sometimes leads to intoxication.