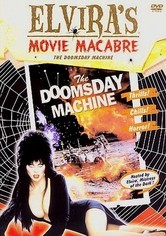 1983 NR 1h 23m DVD
A host of Hollywood veterans (including Grant Williams, Mala Powers, Henry Wilcoxon, Ruta Lee and Denny Miller) populates an orbiting spaceship in this campy sci-fi classic brought to you by mistress of the dark Elvira (Cassandra Peterson). The vessel's bickering crew must make peace with one another if they're to succeed in repopulating the human race after Red China sets off a nuclear holocaust that obliterates Earth.