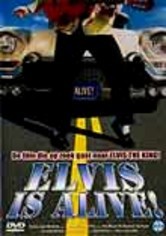 1999 NR 1h 35m DVD
Will this off-the-wall mockumentary finally put the rumor of the century to rest? You be the judge! Focusing on a group of people who purportedly swear to have seen the King of Rock 'n' Roll alive, this wacky film is like a tabloid newspaper come to life. Featured are such "authoritative" voices as Mr. Blackwell, Dr. Joyce Brothers, actress Vicki Lawrence, comic Rip Taylor and actor Fred Willard. Robert Diaz LeRoy directs.