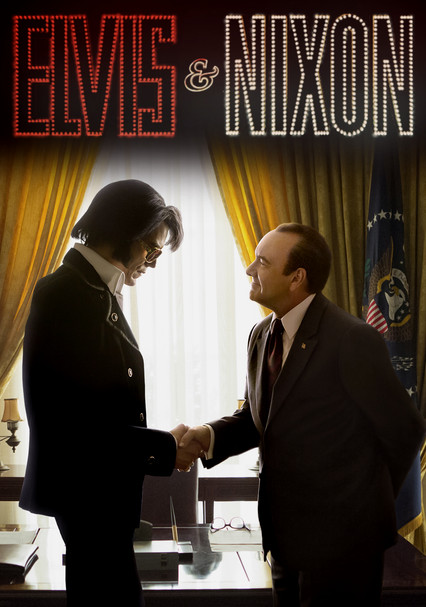 2016 R 1h 27m Blu-ray / DVD
Among the many strange episodes that took place in Richard Nixon's presidential administration, one of the most bizarre was Elvis Presley's surprise visit to the White House, followed by a secret meeting with the nation's commander-in-chief.

Parents need to know that Elvis & Nixon is a fictionalized take on what the real-life 1970 meeting between Elvis Presley and President Richard Nixon might have been like. Characters carry guns, and guns are shown in several scenes; Elvis shoots a television set with one. Strong language includes multiple uses of "f--k," as well as "s--t," "goddamn," and more. There's also some mild flirting and references to the "fight against drugs." Teens with an idea of who these famous figures were might be interested in seeing what this movie is all about, but mostly it's a novelty aimed more at older viewers.

Brief guns and shooting (Elvis shoots his TV). Characters carry guns. Elvis gives the president a gun as a present.

Persistence, respect, and kindness can have a surprising effect.

References to drug users and the "fight against drugs."