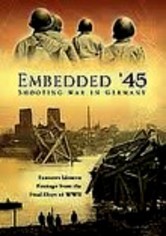 2006 NR 1h 40m DVD
This collection of front-line photography documenting the harsh realities of conflict rounds up stirring shots snapped by cameramen who were embedded with American troops during the tail end of World War II. Highlights include previously unseen footage from the Arnoldsweiler concentration camp, the U.S. Army's advancement through the German cities of Cologne and Frankfurt, and images of captured German POWs.