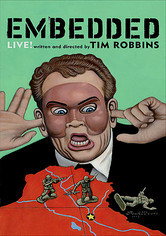 2005 NR 1h 34m DVD
Filmed live at the Public Theater in New York City, Tim Robbins's raucous and wildly successful antiwar satire boasts boisterous performances, kinetic editing and music by the Clash, System of a Down and Bob Dylan. Uncompromising, moving and very funny, the stage play mercilessly skewers the Bush administration's rush to war and the complicity of the media in this enterprise, while remaining sympathetic to the soldiers on the front lines.