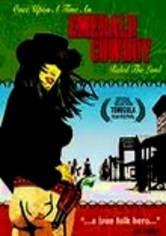 2003 R 1h 30m DVD
The true story of how Eishy Hayata, a Japanese businessman from Los Angeles, built an emerald-mining empire in Colombia that is today one of the world's largest and most powerful. Central to the film's intrigue are such brutal realities as guerrilla warfare and street kidnappings, both common in Colombia. To combat this, Hayata armed himself to the teeth -- like a latter-day cowboy -- and employed a posse of personal bodyguards.