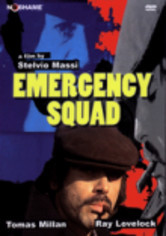 1974 NR 1h 35m DVD
A ruthless Interpol agent goes after the man who killed his wife in Stelvio Massi's crime thriller. A gutsy robber named Marseilles (Gastone Moschin) pulls off a tricky heist, but he's no match for agent Ravelli (Tomas Milian), a maverick who can't control his bloodlust. And this time, it's personal: Years earlier, the daring thief murdered the operative's wife in cold blood. Extras include the last interview with the late Massi.