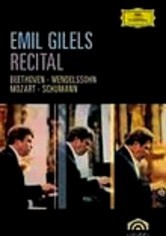 1971 NR 1h 32m DVD
Ukrainian piano virtuoso Emil Gilels performs a selection of pieces from German and Austrian composers in this concert from the Carinthian Summer Festival in 1971. Widely considered one of the most significant pianists of the 20th century, Gilels is known for his superb technique and tonal control. Among the offerings are works from Beethoven, Mendelssohn, Mozart and Schumann.