Emile Norman: By His Own Design 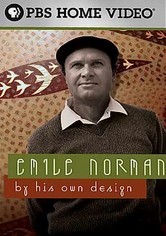 Emile Norman: By His Own Design

2008 NR 1h 0m DVD
Artist Emile Norman is the subject of this compelling documentary profile, which chronicles the 88-year-old's personal life as an "out" gay man long before it was the norm, as well as his lifelong dedication to his art. Norman, whose mixed-media works include the grand marble relief and ornate mosaic window of San Francisco's Masonic Auditorium, found success in New York but retreated to Big Sur, Calif., where he founded an artists' haven.