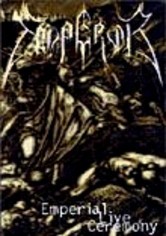 2000 NR 0h 58m DVD
The Norwegian metal band Emperor lashes out with 10 demonically dark numbers during the London stop of their 1999 tour. The band performs powerful renditions of favorites such as "Curse You All Men," "Thus Spake the Nightspirit," "I am the Black Wizards," "An Elegy of Icaros," "With Strength I Burn," "Sworn," "Night of the Graveless Souls," "Inno A Satana," "Ye Entrancemperium" and "The Loss and Curse of Reverence."