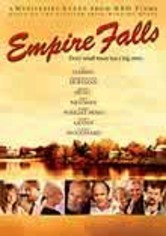 2005 TV-PG 2 discs
In a tiny Maine town, modest restaurant manager Miles Roby (Ed Harris) goes through the motions as he tries to keep his Empire Grill restaurant afloat while dealing with an abrasive boss (Joanne Woodward), a wife (Helen Hunt) who ran out on him, a nosy father (Paul Newman) and a teenage daughter (Danielle Panabaker). This critically acclaimed HBO miniseries is based on Richard Russo's Pulitzer Prize-winning novel of the same name.