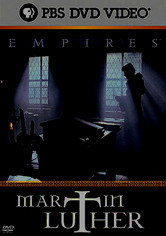 2002 NR 1h 50m DVD
Rabble-rouser or secular saint? The man who revolutionized the Christian church in the 16th century and became the father of Protestantism was probably a little bit of both. This historical look at Martin Luther originally aired on British television (and on PBS in the United States) and serves as a wonderful educational primer of a fascinating religious epoch.