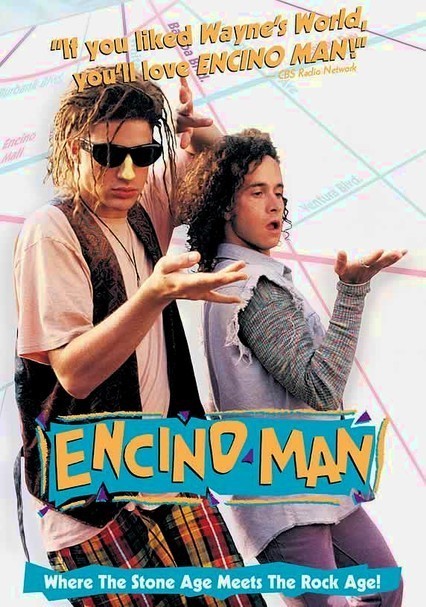 1992 PG 1h 28m DVD
High school misfits Stoney (Pauly Shore) and Dave (Sean Astin) discover a long-frozen primeval man from the past in their back yard. But the thawed-out Link (Brendan Fraser), as the boys have named him, quickly becomes a wild card in the teens' already zany Southern California lives. After a shave and some new clothes, Link's presence at school makes the daily drudgery a lot more interesting in director Les Mayfield's fish-out-of-water comedy.

Parents need to know that this silly teen sex comedy is heavy on objectifying girls' bodies, showing them in skimpy clothes and talking about girls' body parts. Characters also do some things that parents wouldn't want their kids to do: They lie to their parents, they use their friends to become more popular, they steal a car, they go to a bar, they break into school, and break into a house. There's also some swearing and comic violence.

Minor pratfalls and a punch. The guys watch professional wrestling and boxing on TV.

Some salty language, including "bulls--t," "piss," "dips--t," "hell," and several words for breasts, including "gazongas" and "honey cones." Matt calls someone a "fag."

Dave tries to use Link to become more popular and doesn't care about him. He also tries to abandon him. Matt breaks into the school and later breaks into Dave's house. Matt calls someone a "fag."

Stoney drinks tequila and gets drunk. The gang goes to a bar even though they are underage.