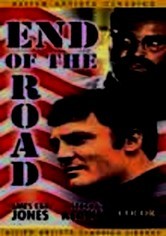 1970 R 1h 50m DVD
College graduate Jacob Horner (Stacy Keach) becomes part of a strange experiment when the mysterious Doctor D (James Earl Jones) finds him lying on a railway platform. Brought to live on the doctor's Remobilization Farm, Jacob undergoes a series of psychological tests and is later released to finish his recovery. The only catch? He must avoid all personal and political entanglements -- a task that proves impossible.