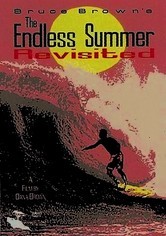 2000 NR 1h 10m DVD
In 1966, filmmaker Bruce Brown released a documentary on surfing that exposed the beauty and excitement of the sport to a whole new, non-surfing audience. Brown and his son, Dana, have created a new film that weaves footage of some of the finest surfers of the day with vintage, never-before-seen footage from the first movie. Among the riders featured are Patrick O'Connell and Robert August, who was in the original Endless Summer.