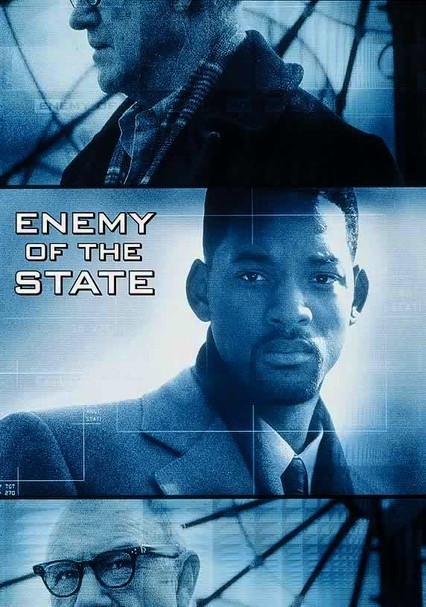 Parents need to know that Enemy of the State is a 1998 action movie with frequent profanity, action-style violence, and sexual content, including references to oral sex and infidelity. While the movie does show the machinations of a pre-9/11 government agency determined to a ruin the life and credibility of a man in possession of filmed evidence of spies killing a Congressman, the primary focus is on the nonstop action. There are also racial slurs: an African-American lawyer is referred to as an "eggplant," and Italian-American mobsters are called "guidos."

A Congressman is spied on in his hotel room receiving oral sex from a woman; while no body parts are shown, the motions and gestures make it obvious what is happening. After being asked questions about an extramarital affair he has had by his employers, the lead character asks one of them if he masturbates in the shower. During a scene in a lingerie store, a female employee dressed in lingerie asks the lead character for the breast size of his wife. His wife is later shown in the lingerie as they begin to flirt in a provocative manner. When the lead character and his wife make insinuations about having sex, their young son asks, "Are you guys talking about sex?"

Frequent action-movie violence. A man on a bike is shown being killed by riding in front of a fire truck. During the opening credits, a series of car crashes are shown overhead. A woman is found dead in her bathroom from an apparent suicide. Frequent explosions and gunfire. A man gets shot in the head. Characters shoot at each other from point-blank range, resulting in numerous deaths.

Frequent profanity. The f-word is used on a regular basis. Members of the mafia refer to an African-American lawyer as an "eggplant." Italian-Americans are referred to as "guidos."

While the movie is filled with messages on the scope and reach of surveillance in our society, the primary focus is the action itself.

Pills are placed around a politician's head to look like a suicide after he is murdered.