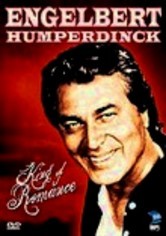 1998 NR 0h 48m DVD
Languishing in obscurity performing under his given name, crooner Gerry Dorsey shot to stardom when Tom Jones's manager suggested he try the Engelbert Humperdinck moniker instead. The rest, as they say, is history -- much of it captured here. In performances shot on vintage kinescope, film and video, the "King of Romance" lends his silky smooth vocals to hits such as "Release Me," "After the Lovin'" and "Quando, Quando, Quando."