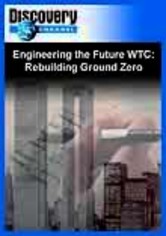 2004 NR 0h 50m DVD
The award-winning team at the Discovery Channel produced this intriguing documentary. Cameras follow the efforts of New York City's urban planners, architects, leaders and residents as they set about creating a vision for the future. Together, the groups work toward erecting an impressive and inspiring replacement for the World Trade Center and its surrounding buildings, which were leveled in the horrific terrorist attacks of Sept 11, 2001.