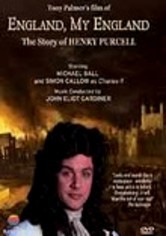 1995 NR 2h 32m DVD
Henry Purcell was one of the greatest composers to emerge from 17th-century England, but little is known of his life. This unique film compensates for gaps in the biographical record by framing Purcell as the subject of a modern-day playwright's research. Broadway and London stage star Michael Ball portrays Purcell in filmmaker Tony Palmer's fascinating experimental biography, and Purcell's music provides the soundtrack. Simon Callow co-stars.