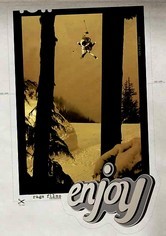 2007 NR 1h 1m DVD
Travel around the planet to the mountains of Alaska, Austria, Switzerland, Sweden, Colorado and Utah to witness the amazing prowess of world-class skiers such as Jamie Pierre, Tom Wayes, Daron Rahlves, Julian Carr, Reggie Crist, and Enak Gavaggio. Filmed during a highly unpredictable ski season in which snowfall was limited, this program offers a staggering number of breathtaking action clips.