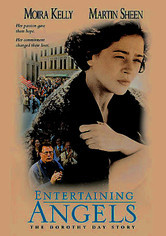 1996 PG-13 1h 51m DVD
During the Great Depression, Dorothy Day (Moira Kelly) vows to house the homeless, feed the hungry and tend the sick. Problem is, her total savings amount to 97 cents. Yet Dorothy persists via her unshakable faith, eventually launching the activist newspaper &NFiThe Catholic Worker&NFi_; in her crusade for social justice. Martin Sheen and Melinda Dillon co-star in this true story of a woman who's been called "the American Mother Teresa."