Entrails of a Beautiful Woman 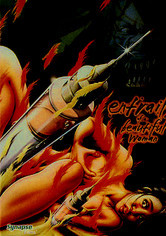 Entrails of a Beautiful Woman

1986 NR 1h 7m DVD
The Japanese Yakuza have stepped up their reign of terror, amping up the brutality of their crimes. After they drug and assault a young woman, she winds up killing herself in front of her doctor (Kazuo Komizu), who decides to seek revenge in her patient's name by taking on the mob herself. The punishment she metes out is worse than anything concocted by the criminals, who are rendered helpless by her endless quest for justice.