Entrails of a Virgin 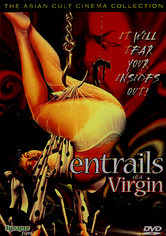 Entrails of a Virgin

1986 NR 1h 12m DVD
Kazuo Komizu's gory thriller dares to explore the myth of otherworldly creatures that go "bump" in the night. In this case, the creature's not only an eerie specter, it's a murderous one, too. Its victims of choice? Three alluring models (Naomi Hagio, Megumi Kawashima and Saeko Kizuki) who are stranded in the woods and hole up in a dilapidated cabin during a dense fog. A killer swamp monster soon tracks them down and forces them to be sex slaves.