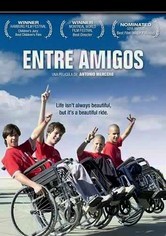 2003 NR 1h 40m DVD
Directed by Antonio Mercero, this 2003 comedy (based on real-life events) follows cancer-ward residents Miguel Angel (Juan José Ballesta) and his trio of teenage friends -- who are always up to mischief. Despite their grave conditions, the four youngsters play roundball in their wheelchairs, chase skirts and pull pranks on the hospital staff. The cast also includes Luis Ángel Priego, Gorka Moreno, Alejandro Zafra and Marco Martínez.