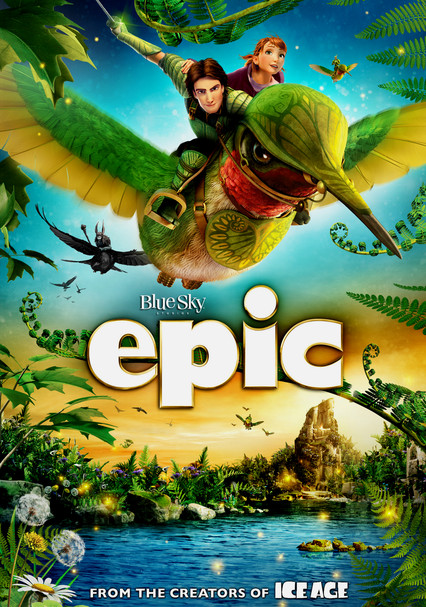 2013 PG 1h 42m Blu-ray / DVD
Magically transported to an enchanted forest, a teenage girl joins forces with a scruffy group of residents fighting a battle against evil -- and soon realizes they must win to save both their world and hers.

Parents need to know that Epic is an animated adventure from the same studio behind the Ice Age franchise and Rio. Part eco-friendly tale and part tiny-creatures story, Epic (which was inspired by the characters in William Joyce's children's book The Leaf Men and the Brave Good Bugs) centers on a teen girl who's magically shrunk into the world of miniscule armed archers called Leafmen who protect the forest from evil. There's a central good vs. evil theme, as well as a parent vs. adolescent storyline that should appeal to kids, but know that there are definitely battles and even a small body count (mostly due to arrows). The main villain is merciless and believes that it's his mission to destroy the forest and rule over a rotting wasteland. In addition to the violence, there's a romantic nature to two relationships in the movie, as well as several flirty (and snotty) jokes courtesy of a slug voiced by Aziz Ansari. Expect some insult language ("stupid," "idiot," etc.).

Queen Tara and Ronin, head of the Leafmen, flirt and embrace. Later in the movie, M.K. and Nod clearly show an interest in each other and end up kissing once. The slug Mub keeps flirting with M.K. and trying to convince her to "get with him."

A couple of characters (both "good" and "evil") die in battle from arrow wounds and falling to their death. The Leafmen and the Boggans fight in armed formations. The Boggans can cause plants to die with rot, and their goal is to make the forest a wasteland with nothing but rot and death. A character is presumed dead but is just gravely injured. There are several "close calls" when it seems like it's the end for sympathetic/favorite characters.

Positive messages about children trusting their parents, the maturity it takes to stop thinking of just yourself and doing what's best for your people, the vital part that every creature plays in the thriving of a forest, and the necessity of teamwork to overcome various obstacles.

An iPod plays an important role and the logo is partially visible.