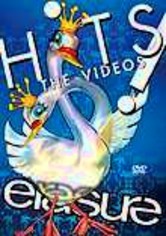 2003 NR 2 discs
This definitive Erasure collection features 35 music videos spanning the years 1985-2003, six promotional documentaries that include interviews with Vince Clarke and Andy Bell, extensive performance footage from the band's major tours and more. Highlights include a live version of "A Little Respect," an alternate "Oh L'Amour" video and a cover of ABBA's "Take a Chance on Me" that features Clarke and Bell dressed in drag.