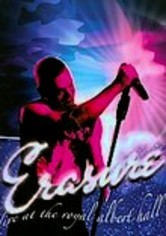 2007 NR 2h 0m DVD
Erasure -- Vince Clarke and Andy Bell -- perform their synth-pop classics and newer hits from their "Light at the End of the World" album in this exhilarating 2007 concert recorded live at London's Royal Albert Hall. One of the U.K.'s most successful duos of the 1980s and '90s, Erasure energizes fans with "Chains of Love," "A Little Respect," "Sunday Girl," "Glass Angel" and more. Extras include never-before-seen footage of the chart-topping duo.