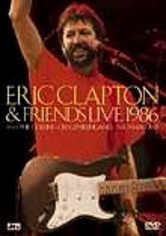 1987 NR 1h 2m DVD
Rock legend Eric Clapton toured the "August" album in 1986 with a line-up that consisted of a select band of musicians who had helped him make hit platter. Among those featured were Phil Collins, Greg Phillinganes and Nathan East. This concert was recorded in Birmingham, England, and includes classic songs such as "Crossroads," "Layla," "Sunshine of Your Love" and more.