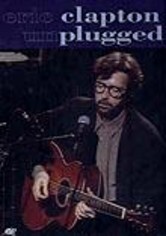 1992 NR 1h 10m DVD
Sitting in to perform on MTV's all-acoustic show "Unplugged" in 1992, Eric Clapton turned this live session into a Grammy-winning album. Features more than a dozen songs spanning the famed blues-guitar master's career, including "Layla" (penned for his former spouse, Patti Boyd Harrison), "Before You Accuse Me," "Malted Milk," "Rollin' and Tumblin'," "San Francisco Bay Blues" and "Tears in Heaven," the tribute song to his late son.