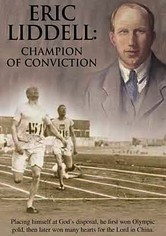 2008 NR 1h 40m DVD
The life of Olympic athlete and missionary Eric Liddell (the subject of Academy Award winner Chariots of Fire) is chronicled in this documentary, which tells his inspiring story through interviews with his biographer and those who knew him. A devout Christian, the Scottish track star refused to compete in an Olympic event held on a Sunday. He went on to missionary work in China, where he was eventually imprisoned by the invading Japanese.